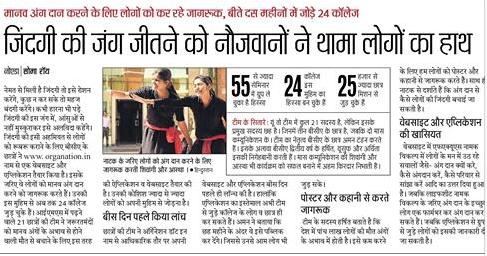 Fast forward 6 months, I along with 6 of my best friends, started and registered an initiative named OrgaNation, and we arranged a talk at a village. The village people welcomed us with Samosas and homemade chilled drinks, and the panchayat leader influenced half the population to listen to us. As we started, the whole crowd suddenly got very angry, one of the female group started chanting, some men threatened us but since we were with the leader things settled and everyone left within 5 minutes. Panchayat leader questioned us ” How will I see my parents in Heaven if I donate my eyes?” and suggested not to come to this village again.

We thought the village was our target audience, but it was not. So after another 3 months running fast and taking 1200+ Pledges with mixed responses, we decided to change the next generation, Youth and only focused on making them aware.

At the Final Stages in November 2018 the statistics read as follows:

– 287 Campus Ambassadors from different colleges
– 98234 Donor Pledges
– 16,009 Volunteers that verified the Hospital License Status
– 56 Colleges agreed to include this in their Induction
– Partnered with NOTTO ( National Organ Tissue and Transplant Organisation) and were awarded for making the Central Database of Hospitals in India

The most formidable thing this initiative was able to achieve was to make the centralized database of all the Hospitals in India which required the support of  16,009 volunteers from every district and city that helped us verify the Certificates of Hospitals that have the license. This whole verification took us 2 years but when it finally did complete it felt like the mission of the Organisation was complete.